What is the red palm weevil?

The red palm weevil, Rhynchophorus ferrugineus (Olivier, 1970), is a beetle of the curculionid family. This earthy red weevil, about 3-4 centimeters long, has become famous for the havoc it wreaks on populations of palm trees in the Mediterranean region. The flying adults do not live longer than two or three months, time enough to reproduce and deposit their eggs in the crown of a palm tree. Although they prefer the Canary date palm (Phoenix canariensis) and in general tend to infect date palms in general (genus Phoenix), more specific attacks have been reported on many other species such as Washingtonia, Brahea, or Butia.

The female, capable of laying as many as 500 eggs, is attracted to kairomones, odorous molecules that palm trees exhudate through wounds and pruned leaves. As the eggs hatch, hundreds of borer larvae, initially 2 millimeters long, begin to feed voraciously on the tissues of the crown and leaf bases. The larvae grow, reaching 5 centimeters and creating numerous galleries that end with the death of the host palm.

Distribution and spread of the pest 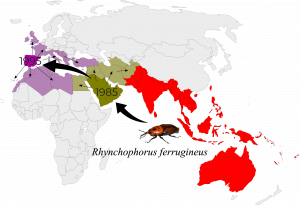 The red palm weevil is native to Polynesia and Southeast Asia where it naturally infects the coconut palm Cocos nucifera. At the end of the 19th century, date palm crops arrived in India and Indochina, and the red palm weevil found a new highly vulnerable host, being declared for the first time as a very harmful pest, difficult to control.

The spread of the plague to the Middle East and the Mediterranean Basin, where it has its most destructive effects as it spreads through the oases of the region, has been facilitated by humans who transported infected palm trees or their parts to new regions that were previously free of the plague. The first invasion event was recorded in the Arabian Peninsula during the 1980’s. The first observation dates from 1985 in the area of ​​the United Arab Emirates, from where the beetle could spread to North Africa and the Middle East, reaching Egypt and Iran in the early 90’s.

It seems that a second great event that facilitated its colonization of Europe and the Western Mediterranean was due to the transport of date palms from Egypt to the South of Spain in 1995, transforming the Iberian Peninsula into a second outbreak for its expansion. From Spain, where it caused serious damages to historical palm groves such as the one in Elche and began to attack ornamental Canary palm trees and not mainly those dedicated to date production, it colonized Morocco, the Canary Islands, and many countries in the Southern and Western Europe.

The most obvious symptoms that the red weevil is attacking a palm tree may not appear for several months, which complicates the early detection and rapid treatment of the disease in its initial stages. The first symptoms are the presence of the adults that will lay eggs on the plant, or of the larvae, and the subsequent appearance of the first perforations of the larvae that usually appear in the pruning cuts or the axils of the leaves. Sawdust and gnawed pieces of leaves may also be visible and may appear on the crown or fall to the base of the palm tree. Later symptoms characteristic of a more advanced stage of the disease appear later. For example, leaves that are badly gnawed and perforated at their base can bow under their own weight, so that green and apparently healthy leaves can hang. Progressively, the palm tree will adopt a plumb appearance, with mature leaves hanging or begining to turn yellow, and central leaves that appear small, twisted and with a tobacco color.

At Palmer Brothers we are committed to the fight against the red palm weevil, and for this reason, in addition to introducing more resistant palm species, we offer products and services for the treatment of this pest. Treatments against the red palm weevil can be differentiated between preventive treatments, which are the most recommended and most successful, and curative treatments. Among the preventive treatments we will differentiate prevention at the individual level and at the population level. The most common preventive treatment is endotherapy, which consists of injecting phytosanitary products into the interior of the palm tree through pegs placed in perforations that prevent the larvae of a possible infection from proliferating inside the treated palm tree. At the population level, weevil traps can be used, which are boxes or bottles with an attractant such as sexual pheromones or kairomones that trap the weevils that have been attracted, or the biological fight with entomopathogenic fungi. Biological control is useful in the case of populations of palm trees, and it will prevent, in the event that one of the palm trees in the population has been successfully infected by the beetle, that it acts as a source of expansion of the pest. To do this, fungal spores  that infect the weevils are spread in the crowns of the palm trees, so that the larvae are infected and despite killing the first palm tree they have attacked, they will not be able to develop their adult phase and infect palm trees of the surroundings. Finally, there are phytosanitary treatments by foliar spray, which are usually used on already infected plants, and which have a very high cost and less success, since many times the infected palm trees cannot be saved.

Shopping Cart
We use cookies on our website to give you the most relevant experience by remembering your preferences and repeat visits. By clicking “Accept All”, you consent to the use of ALL the cookies. However, you may visit "Cookie Settings" to provide a controlled consent.
Cookie SettingsAccept all
Manage consent

This website uses cookies to improve your experience while you navigate through the website. Out of these, the cookies that are categorized as necessary are stored on your browser as they are essential for the working of basic functionalities of the website. We also use third-party cookies that help us analyze and understand how you use this website. These cookies will be stored in your browser only with your consent. You also have the option to opt-out of these cookies. But opting out of some of these cookies may affect your browsing experience.
SAVE & ACCEPT