In 1997, botanists from the University of Murcia described a new species, Phoenix iberica [1], an “Iberian species, which closely resembles the date palm, although its fruits are of smaller size and quality”. They acknowledge natural populations in the river basin of the Chícamo River, in the Abanilla Desert (Murcia), today a protected River Nature Reserve. Since its description, this palm has been highly controversial both among palm lovers and within the scientific community. Although it is true that the main taxonomic institutions still do not recognize P iberica as a species or as a variety [2,3], it is also true that molecular studies are capable of detecting the genetic exceptionality of Murcian populations of wild date palms [4]. Two main hypotheses coexist today, the “rewilded” hypothesis and the “vicariant” hypothesis. But before getting into the matter, let’s put the topic in context.

The date palms in context

The genus Phoenix includes 14 species, generally known as date palms, distributed throughout southern Europe, Africa, the Arabian Peninsula, and South Asia. One of them, P dactylifera, or the date palm in the strict sense, is a species that is widespread in cultivation in North Africa, the Mediterranean basin, and the Middle East, but for which no natural populations are currently recognized [5,6]. There are hundreds of man-made varieties of P dactylifera, such as the “Mejdool” or “Barhee” varieties, which are cultivated in order to produce dates. P dactylifera is one of the oldest known domestic plants, as humans started planting and selecting variants in Mesopotamia more than 5,000 years ago [7]. Its cultivation quickly spread throughout North Africa, being brought to the south of Spain by the Phoenicians before the invasion of Hispania by the Romans [8]. 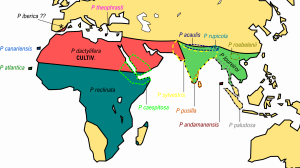 P caespitosa, P sylvestris, and the island Phoenixes, canariensis, atlantica, and theophrasti, all overlap geographically with P dactylifera. Outside the region dominated by P dactylifera crops, other Phoenixes exist. On the one hand, the Senegal date palm, P reclinata, is widely spread throughout sub-Saharan Africa. On the other hand, there are a few date palms in Southeast Asia. Officially, P iberica is considered a variant of cultivated P dactylifera, widely expanded during ancient times.

It is not surprising that the international scientific community does not accept P iberica when the Spanish authorities themselves do not recognize its status as a taxon. Volume 18 of Flora Iberica, the botanical reference manual of the plant species of the Iberian Peninsula and Balearic Islands, published by the Royal Botanical Garden of Madrid, refers to this palm within the section dedicated to P dactylifera, indicating that such palm “could belong to naturalized specimens of P dactylifera” [9]. According to this theory, the Phoenicians brought to the Iberian Peninsula, where no plant of the Phoenix genus existed before, specimens of date palm trees for their agricultural plantation. Over the centuries, feral populations have developed from seeds which escaped from crops, having evolved slightly in the new natural conditions they encountered in the Chícamo River and the southern Spanish deserts. This hypothesis, therefore, does not grant a relevant intrinsic value to the rivebed palm tree.

The alternative hypothesis, defended by the same authors who described the species in 1997, suggests that different wild varieties of the dactylifera species, i.e. prior to domestication, have persisted and evolved within the limits of their original natural distribution [10]. Supported by molecular analyzes of seeds, this study proposes that the species P canariensis, P iberica, P theophrasti, P sylvestris, P caespitosa and P atlantica are actually vicariant species, only remnants of the original wild fruit-bearing date palm species. Indeed, all these species have very similar anatomical features to each other and to the cultivated date palm, and they are all found within the current geographic boundaries separating areas cultivated by P dactylifera and regions dominated by Sub-Saharan and Southeast Asian date palms. 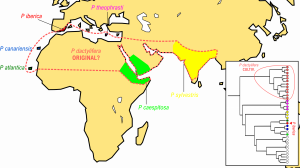 the riverbed date palm, P iberica, is the only palm that is endemic to continental Europe, and one of the few known European palms. Some hypothesize that it is a cultivated date palm that has escaped and become feral in the river basins of the deserts of the Spanish Levant. Although it does not yet have taxonomic recognition, molecular studies indicate that it may be a distinct species. The hypothesis according to which it is a vicariant species, reminiscent of the distribution of original fruiting date palms before the spread of domesticated varieties, is gaining strength.

Shopping Cart
We use cookies on our website to give you the most relevant experience by remembering your preferences and repeat visits. By clicking “Accept All”, you consent to the use of ALL the cookies. However, you may visit "Cookie Settings" to provide a controlled consent.
Cookie SettingsAccept all
Manage consent

This website uses cookies to improve your experience while you navigate through the website. Out of these, the cookies that are categorized as necessary are stored on your browser as they are essential for the working of basic functionalities of the website. We also use third-party cookies that help us analyze and understand how you use this website. These cookies will be stored in your browser only with your consent. You also have the option to opt-out of these cookies. But opting out of some of these cookies may affect your browsing experience.
SAVE & ACCEPT